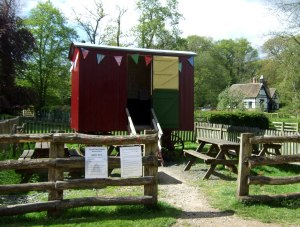 I sprang off the steps of my Shepherd Poet’s Hut yesterday morning to catch up with Simon, Horseman at Acton Scott, and Alan, who were taking Charlie the Shire to Lawn Field to do some work.

I’d already seen this piece of ground ploughed, rolled and harrowed – and today the team set off to ‘split the ridges’.  This means the horse this time has to walk along the top of the existing narrow ridge (something he doesn’t naturally want to do, says Simon), drawing behind him the plough which will ‘split’ that ridge again.  The earth is worked and made more friable this way, especially after the very wet winter which has tended to leave the soil in clumps.  It’s ready now for drilling the seed for the mangels, which will be a key foodstuff for Acton Scott’s livestock during next winter. 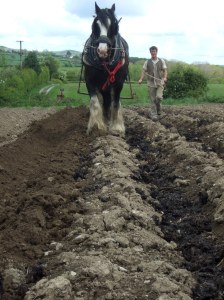 Charlie walked his ridge expertly, but was noticeably distracted at the turn where an admiring crowd was watching him.  ‘He’s a sociable horse, he knows – ‘ Simon whistles at Charlie to get his attention – ‘he knows visitors mean patting and not working’. 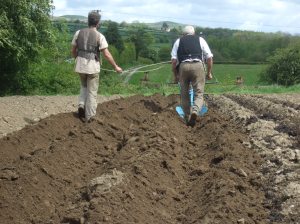 I think I have the seeds of a poem out of this, something like:

together again
for the drilling

from ropes to bit.
And the other man bending

on the plough handles,
silent with effort.

One bright wagtail
flashing in the furrow.